Discover Ibiza Town, Santa Eulària, Sant Antoni and Formentera onboard a luxury yacht in the Balearic Islands for the ultimate Mediterranean vacation this summer

Embarking on an Ibiza yacht charter this summer will give you the opportunity to see some of the most spectacular anchorages and beach clubs in Formentera, the glorious bays of Cala Tarida and the hedonistic nighlife of Ibiza Town.

Ibiza is the most iconic island in the Mediterranean due to its serene bays, mythical islets and uniquely hedonistic culture. The island offers yacht charterers natural beauty, quiet coves and an inexhaustible range of activities. In fact, large portions of the island such as "God's Finger" in the Benirràs Bay, are registered as U.N. World Heritage Sites, and thus protected from development.

Ibiza is the closest of all the Balearic Islands to mainland Spain, offering 200 km of coastline and over 50 excellent beaches. When combined with her neighboring island of Formentera, known as "Ibiza's chilled out sister", the two "Pine Islands" provide an excellent array of sun-drenched activities and attractions, including some of the best restaurants and beach clubs in the Mediterranean.

Ibiza is one of our most successful summer yacht charter destinations for all types of charters - be it onboard a stunning crewed motor yacht, crewed catamaran or bareboat sailing yacht - however if you want only a taste of this, rent a boat for the day from Ibiza. Given the extreme popularity each summer, we recommend planning ahead so that your Charter Expert can secure your preferred yacht, tailor your itinerary and reserve moorings. 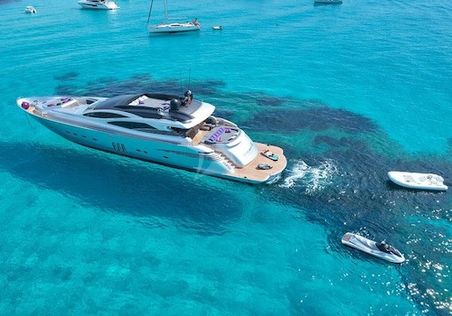 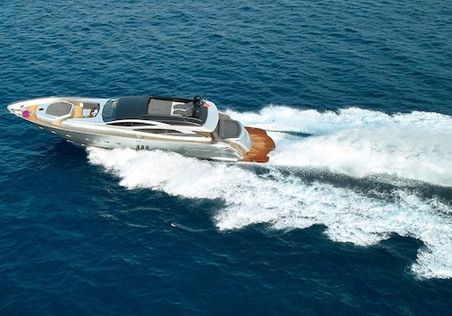 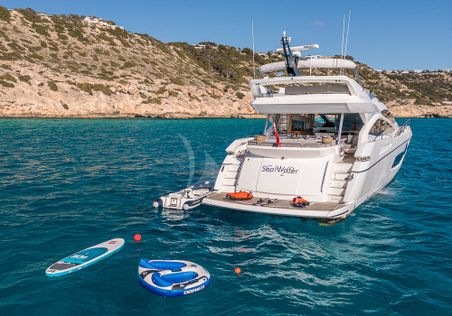 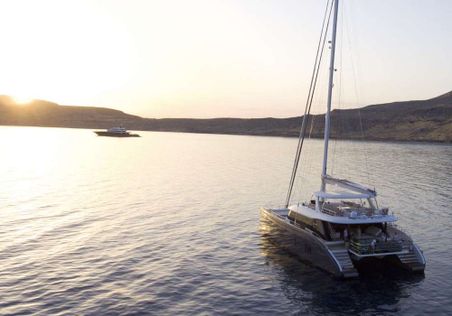 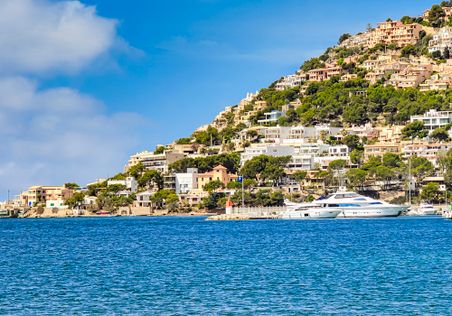 Ibiza provides all the key elements for a crewed motor yacht charter - great anchorages, world-class shopping, top restaurants, exciting nightlife and scenic destinations such as Formentera. Enjoy long lunches at Beso Beach in Formentera, Blue Marlin in Es Jondal or the wonderful Cotton Beach Club close to the majestic Es Vedra rock formation. Don't forget the mesmerising sunsets over San Antonio, as well as from your serene anchorage in Formentera. Given the close proximity to neighbouring Mallorca, family yacht charter holidays can often combine both destinations, so that you will experience two of the Balearic Islands on the same vacation.

Mainly influenced by constant easterly winds, Ibiza is an excellent destination to embark on a weekly crewed catamaran itinerary. Offering outstanding anchorages all around the island, especially to the south close to Formentera, chartering a crewed catamaran in Ibiza has never been a better idea for summer. Enjoy shallow waters with crystal clear anchorages, spectacular rock formations and fascinating sailing. With great volumes, spacious deck areas and fantastic selections of water toys, choosing a catamaran for your family this summer is the obvious choice.

The main city of the island is Ibiza, on the south of the island. The other two major cities are Santa Eulària des Riu (further east) and Sant Antoni de Portmany (on the west coast, and therefore known for its sunsets). A cruise around the island generally includes a stop in Santa Eulalia, a tour of the rugged North Coast, and a stop off in Sant Antoni (often referred to as San Antonio) and of course a stop in the Old Port of Ibiza.

Santa Eulària des Riu offers beauty, serenity, light and tradition. The key sights in the town are the Puid de Missa, declared a site of scenic beauty by the Ministry of Culture in 1952. The church, built in the 16th century as part of the island’s defences, was a centrepiece for the construction of the first houses in the town in the following century.

There are plenty of churches to explore including Mare de Deu de Jesus, Santa Gertrudis de Fruitera, and Charles de Peralta. There is also a 400+ meter aqueduct, built in the first century AD. There are several beautiful beaches near Santa Eulària that offer great sand, beautiful views and clean waters. Nudism is practised on most beaches.

San Antonio is famous for its sunsets and lively nightlife. The port will often have scores of Ibiza charter boats and luxury yachts anchored, adding to the festivities and exciting vibe of the white island.

The square of San Antonio boasts a wide selection of restaurants and cafes offering a view over the bay. It is also the best place from which to watch the large Fireworks Display which celebrates the fiesta of Saint Bartholomew on the 24 August.

The 'West End' is where all the nightlife in Sant Antoni is centred. The main street is the Carrer de Santa Agnès, which hosts a variety of bars and small clubs ranging from the Dance and House music Ibiza is famed for, to Rock and Indie music. Popular bars include Viva, Hush, Koppas, Tropicana, Soul City, Funky Flares, Ground Zero and The Huddle Bar.

Formentera is an island that is largely unsettled, and therefore pristine and unspoiled. The island is just south of Ibiza and a popular destination for day charters who go there to bathe, relax in the sun, and have a lunch at one of the beach restaurants - the most famous being Juan Y Andrea. The island is 19 kilometres long and is located approximately 3 nautical miles (6 km) south of Ibiza. Its major villages are Sant Francesc Xavier, Sant Ferran de ses Roques, El Pilar de la Mola and La Savina.

The island is known for its many pristine beaches and the fact that nude sunbathing is allowed on most of its beaches. An Ibiza and Formentera boat sailing charter motorboat charter is an essential component of your next holiday in the Balearic Islands.

Ibiza, being a major tourist destination, is easily reachable from many major European airports. If you're in Spain, there are regular, almost commuter flights to Ibiza from Barcelona and Madrid. You can also catch ferries from Denia, Valencia or Mallorca. Many charterers choose to see all of the Balearic Islands - Mallorca, Menorca, Ibiza and Formentera, giving a varied itinerary that offers it all.

Ibiza is legendary for its clubs and nightlife centered around three areas: Ibiza Town, the island's capital on the eastern shore, Playa D'En Bossa to the south and San Antonio to the West. Well-known nightclubs include Privilege (the largest club in the world), Gatecrasher (the newest and most talked about club in San Antonio), Es Paradís (noted for its water parties), Amnesia (known for foam parties and trance music), Space (an afterparty club) and DC10. These superclubs have made Ibiza the home of house and electronic music. During the summer, well-known DJs perform residencies at the various clubs on weekly schedules, in between touring to other international destinations. To make sure that you do not miss the world's biggest DJ's, head down to Ushuia Beach Hotel in Playa D'En Bossa. The summer line up includes Tinie Tempah, Martin Garrix, David Guetta and Kygo to name but a few.

Pacha in Ibiza Town is arguably Ibiza's most popular club, which welcomes some of the largest names in music. Do not miss the opportunity to reserve a table in the expansive VIP section on a Wednesday or Thursday, where you will find mesmerizing residencies by Steve Aoki and David Guetta respectively.

Also well-known is Café del Mar, a long-standing bar in San Antonio where many tourists traditionally view the sunset made famous by José Padilla. Another favourite is next door at Cafe Mambo, which provides guests with the same unbeatable view, as well as acting as the official pre-party venue for Pacha Wednesday and Thursdays.

One of our favourite beach clubs is Nikki Beach, you are guaranteed a good time with the DJ's and the party atmosphere with a truly exclusive vibe. The beachfront club has a signature pool, renowned restaurant and infamous bar! There are always events occurring to showcase the culinary team, enjoy live music or tailor the dress theme!

The climate of Ibiza is typically Mediterranean and has milder winters but slightly cooler summers than Majorca. The winters are generally mild with temperatures around 15° during the day Celsius (60° Fahrenheit) and 8 at night. The hottest time of the year is July and August with temperatures reaching 30°C (85°F) most afternoons.

Ibiza offers a tremendous variety of excellent restaurants, many are renowned for their traditional Mediterranean style cuisine of fresh fish and shellfish, grilled 'Butifarra' sausages and of course Paella.

Ibiza is a remarkable yacht charter and holiday destination. Boatbookings knows the region and boats inside out and can find you the ideal charter yacht, be it bareboat, crewed, sail, motor or catamaran.

Charter a boat from Ibiza to the Formentera Beaches and Restaurants

Charter a Yacht in the Canary Islands

Charter a Yacht in Valencia

Charter a Yacht in Puerto Pollensa