Phuket is undoubtedly the jewel in the crown of Southeast Asia yachting and provides easy access to the gems of Krabi province, Koh Lanta and the unmissable Phi Phi islands. With easy flight connections from all around the world, warm tropical weather during the European winter, white sandy beaches, great snorkelling, diving, and fishing. Not to mention, the Thai culture and cuisine, with some of the most amazing scenery to be found anywhere in the world. It is easy to see why Phuket has developed into a world-class cruising destination, offering a range of activities to experience on your Thailand yacht charter itinerary. Phuket attracts people from all over the world and thus has a wide variety of yachts to choose from, based on a variety of marinas on the east coast of the island.

There is a selection of luxury crewed yachts based in Phuket, plus a larger number of superyachts visiting the area between November and March each year. They all offer charters to the more remote areas surrounding Phuket; such as Langkawi, Malaysia, the Similan and Surin Islands, the Andaman Islands of India, and the Mergui Archipelago of Myanmar. Each of them unique. The Phuket-Langkawi route takes guests to the much less visited southern Thai islands around Koh Lipe, and on to the duty-free island of Langkawi, Malaysia. The Similan and Surin Islands, on the way to Myanmar, offer the best diving and snorkelling in Thailand. The Andaman Islands and Myanmar truly offer final frontier exploration sailing, where you are probably not going to see another yacht during your cruise! Just nature at its unexplored finest.

With its amazing above water scenery, world-class beaches, and colourful marine life, even people staying in hotels and resorts are compelled to experience the full beauty of the area by chartering a motor yacht for the day. There are several popular destinations to choose; northeast to Phang Nga Bay to admire the sheer limestone cliffs and visit the famous James Bond Island. Or head east to the glorious white sandy beaches of Krabi, and wonder at the rock climbers scaling the surrounding cliffs. Travel southeast to the world-famous beaches and clear blue waters of the Phi Phi Islands, or south to the less-visited Ko Racha and its almost pristine beaches and marine life.

The extensive sailing grounds in all directions from Phuket has led to the development of a robust bareboat charter market, with monohulls and cats from 30ft to over 50ft available. Kayak through the mangrove swamps or alongside sheer limestone cliffs to the northeast of Phuket, then sail south to the clear, sparkling waters of Phi Phi, Lanta and Ko Racha. Don't forget to test the snorkelling equipment on board! All the while admiring the breathtaking scenery both above and below the water. If you want more time to relax, all of these yachts offer the option to add a skipper, cook/hostess and full board catering.

Phuket is the hub of sailing in the Andaman Sea, the perfect starting point to explore the unspoiled beaches and amazing rock formations of Phang Nga Bay, or farther southeast to Langkawi, Malaysia. The adventurous may also want to sail northwest to the Similan Islands, Surin Islands and the unspoiled Mergui Archipelago of Myanmar.

To the north and east of Phuket is Phang Nga Bay, which consists of 100 islands with incredible rock formations and towering limestone cliffs climbing vertically out of calm turquoise waters. This area is a marine national park leaving the scenery unspoiled, with caves and mangrove swamps to explore around every corner. It is a "must explore" destination for any Phuket Yacht Charter.

James Bond Island (Ko Tapu), pictured here, has become a major Phuket tourist attraction since it was filmed in the James Bond film, 'The Man with the Golden Gun”. It is quite dramatic sticking straight out of the water and has become emblematic of the amazing topography of Phang Nga Bay.

But some friendly advice – it does get very busy in the middle of the day with day-trippers from Phuket, so best to arrive mid-afternoon and anchor nearby for the night, enjoying the relative peace of the end of the day and the start of the next morning when the day-trippers have gone home. 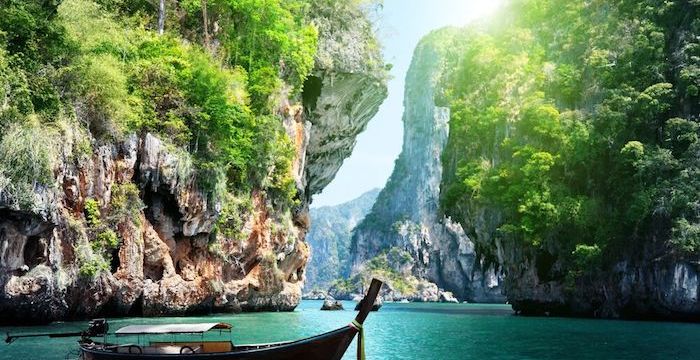 Krabi is on the Thai mainland, almost directly east of Phuket Island. The vibe is more chilled than the chaos of Phuket, but still with the amazing sea mountain scenery, and coral-fringed islands that offer superb snorkelling. Railay Beach just to the south of Krabi is world-class. Also just south of Krabi, a thriving rock climbing environment has developed. Unless you are feeling brave, probably best to open another beer on your yacht and just watch! Most Phuket yacht charters visit Phang Nga Bay and Krabi on the same journey.

Koh Lanta is an archipelago of approximately 70 islands located south of Krabi. Koh Lanta offers many white sandy beaches and a relaxed lifestyle that is less touristy than the beach towns of Phuket. Koh Lanta has several world-class snorkelling and diving sites, including the famous square kilometre of coloured coral, and the twin underwater pinnacles of Hin Daeng and Hin Muang.

Even before it was made famous as the location of the movie "The Beach" Koh Phi Phi was a ‘must-visit’ yacht charter destination due to its spectacular cliffs and beautiful waters. The snorkelling, swimming and diving here are truly amazing. Maya Bay is the most famous part of the Phi Phi group of islands, so best to avoid the rush in the middle of each day. For the middle of the day, take a tour of the other islands in the group, which are far less visited. Anchor outside Maya Bay at the end of the afternoon, wave goodbye to the speedboats as they take the day-trippers back to Phuket, and relax and enjoy some late afternoon snorkelling with just you and the fish, then watch a spectacular Phi Phi sunset. Phi Phi is also the only place in the islands off that has some nightlife, with a good selection of bars, restaurants, and clubs active until the early hours.

The Similan Islands, which lie northwest of Phuket, consist of huge granite boulders, which continue down to the seafloor to create a wonderful underwater world where the water clarity is breathtaking. The coral and marine life here makes the diving the best in Thailand, and compares favourably with the best in the world – a true snorkelling and diving paradise! The Similan Islands are an increasingly popular, but still unspoiled, Phuket yacht charter destination.

The Surin Islands are 50 miles further north from the Similan Islands, part of the Mu Koh Surin National Park. They offer excellent swimming, diving, snorkelling and game fishing, and are virtually unspoiled and uninhabited. In the Similan and Surin Islands, the game fishing is superb - the best in Thailand. But please note that you are only allowed to fish outside the national parks.

Phuket International Airport, located on the northwest coast of Phuket, is the second busiest airport in Thailand. It is the gateway for millions of tourists every year to the paradise island of Phuket and the surrounding Andaman Sea and has a wide range of incoming domestic, regional and international flight routes for guests to choose from. Popular Southeast Asia routes into Phuket include from Singapore, Hong Kong, Kuala Lumpur, Shanghai, Seoul, and Beijing. European and US passengers can connect with Middle East carriers in Abu Dhabi and Dubai, or fly into Bangkok Suvarnabhumi Airport and take a short 1-hour hop down to Phuket. There are also direct flights to Phuket from major Australian cities such as Sydney and Melbourne. The airport is also not far from most of the charter yacht marinas on the east coast of Phuket, so no long minibus/taxi transfers after your flight. Yacht Haven Marina is only 20 minutes away, Ao Poh Grande about 30 minutes away, Boat Lagoon and Lagoon about 45 minutes, and Chalong Bay about an hour away on the southeast coast.

Since October 2016, to cope with increasing passenger numbers, the airport now has 2 terminals. The new Terminal 1 is for international flights, and the existing Terminal 2 is now used for domestic flights. For guests doing a Myanmar charter, there are 2 alternatives. Fly to Phuket and take a 4-hour minibus ride north and meet your yacht at the Myanmar border at Ranong-Kawthoung. Fly Bangkok to Ranong, on the Thai-Myanmar border 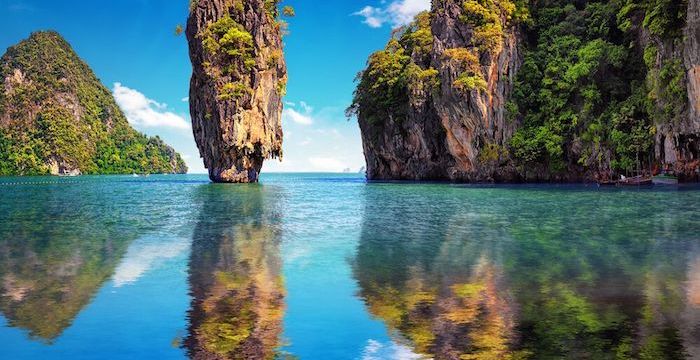 The first thing to say is, this is the tropics! There are no 100% guarantees of the weather in any tropical destination, only average weather patterns over many years. You can get heavy rain showers in the dry season, and a week of glorious sunshine in the wet season! The weather is always warm, sometimes more humid than other times, with the rainfall patterns being the main weather variable. The hottest months are usually April/May, with the relatively cooler months being November to February. The dominant weather pattern around Phuket and the Andaman Sea destinations of Langkawi, Myanmar and the Andaman Islands, are the monsoon winds.

Winds are coming from the northeast across the landmass of mainland Thailand, with most moisture being dumped on the mainland before reaching Phuket. This means below-average rainfall. You often have long periods with no rainfall and constant sunshine during this period, and all the Andaman Sea sailing areas are open for business - from the last frontier adventure sailing of the Andaman Islands and Myanmar to the Similan and Surin Islands north-west of Phuket to the famous limestone scenery of Phang Nga Bay, the beaches of Krabi, Phi Phi and Ko Racha, and south to Ko Lipe and Langkawi. Weeks of fantastic cruising await you in the tropical sunshine.

Winds are coming from the southwest and picking up moisture as they cross the Indian Ocean towards Phuket. Typical weather during this period is sunny and clear in the mornings and early afternoon, with short rain showers late afternoon and evening. To the east and northeast of Phuket, amongst the glorious limestone scenery of Phang Nga Bay, Phuket Island to the west and mainland Thailand to the east protect from the winds from both directions. This means genuine all year round sailing possibilities. As you go further south and southeast of the main island of Phuket towards Phi Phi and down to Langkawi, this is a little more exposed. Therefore, sailing south and southeast will depend a lot on local weather conditions at the time.

The sailing areas to the west and northwest of Phuket, notably the Similan Islands, the Surin Islands, and Myanmar have no protection from the southwest monsoon winds, and those sailing areas are closed from May to October.

The most unsettled weather, and with the highest rainfall, is when the monsoon winds change direction in mid-May and mid-September. That is when you are likely to get a 2 or 3 week period of more consistent rain.

We think you'll love exploring the wonders of Thailand by yacht - click here to see our Phuket charter yachts or simply contact us and we'll recommend the best boat for you.

Charter a Yacht in Thailand and South East Asia