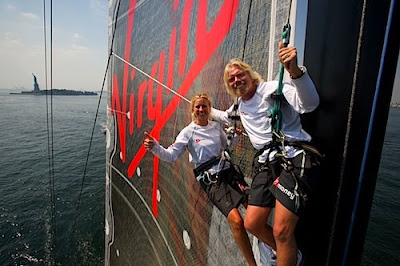 assault on the yacht by 40ft waves in the Bermuda Triangle.Â  The huge waves stripped the boat of one of its life-rafts, took out the spinnaker and ripped the main sail, leaving the boat to limp along until the decision is made as to whether they can still break the record if they repair the damage and carry on.Â  Branson remains confident as the crew of the British 2009 America’s Cup team ‘Team Origin’ form part of the 30 strong crew and are adept at coping in such situations.Â  Teambut if the weather worsens accepts that the day to break the record will have to wait for another time.

The intention of the attempt is to break the current trans-atlantic record of 6 days, 17 hours, 52 minutes and 39 seconds, joining him on this attempt are his two children Holly and Sam Branson and the Olympic hero, Ben Ainslie.
Information courtesy of the Telgraph online